But In Thy Dark Streets Shineth 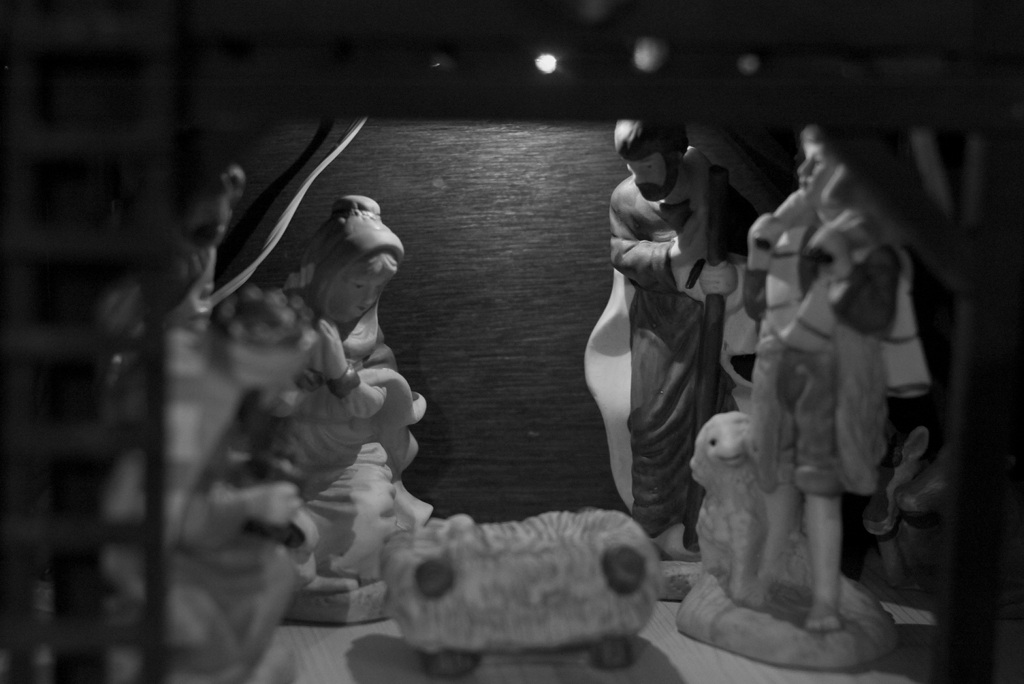 Like so many other families, we have a creche, a nativity set that we assemble every year at Christmas and display somewhere in the house. You see quite a range of these, varying in size and style, from small and realistic to large and cartoony to medium-ish and impressionistic. I've always preferred those that leaned toward the realistic look, perhaps because I just found it easier to connect real-looking figures to a real event than cartoony or abstract ones. The vague forms never really made their point with me, never really moved me to contemplate the significance of the scene they were very vaguely depicting. This, I imagine, is a simple matter of taste.

When I was growing up, my family had a creche that my dad had built before I was born. It was made in three sections and entirely of wood, none of it sanded. This latter detail gave it a rough-hewn character, little grains and splinters perceivable with every touch, the coarseness of the materials visible to the eye even through the dark brown paint and making the whole model immediately believable as a stable for livestock. The detail was intricate, including little support beams and two ladders to the hayloft above the main section, and a completely shingled roof. I can't imagine how long it must have taken my dad to cut all of those little shingles.

It sat in the same place every year, on top of the upright piano that dominated the corner of the living room and that both my sister and I played daily. It was impossible not to gaze into it any time I sat down at the instrument, and I remember staring at the plastic molded figurines for what felt like hours sometimes, imagining what that night must have been like two thousand years ago, wrestling with the tension between the enormity of the event and the humility and quiet of the scene in which it resided.

What really gave the whole creche its impact was a little piece of ingenuity my dad had cobbled together: a tiny incandescent light bulb, soldered to a DC power adapter that had come from who knows what. The bulb was twist-tied to the "ceiling" of the stable, right at the back, and glowed with a soft golden cast that seemed to mimic firelight, just enough to illuminate the whole space of the stable when most of the other lights in the room were out.

Between the figurines, the unfinished character of the wood, and that ethereal light, I couldn't help but stare. A beautiful event had been given an evocative and elegant tribute in this humble depiction my dad had built.

It is that same creche that sits in my living room now. The figurines have had to be replaced, though I'm not unhappy with the ones we were able to find. My wife seemed to realize very quickly the significance of this creche to me, and she has always given its assembly its due importance in the Christmas decorating. My first son, now five and a half, has grown up with it, just as I did. My youngest, now just two and half months, probably hasn't yet noticed it.

But last year as we were putting it away, that old DC adapter was dropped, and the decades-old plastic casing shattered. I knew it couldn't be made to work anymore. But I didn't think much of it until this year when I set it up anew.

It was wrong. The wood was the same, the figurines, though relatively new, were familiar enough. But without that light, it was not what it ought to have been. The nativity should not be dark; it should not exist entirely in shadow. And it was not simply that the scene was missing something, but rather that the absence of light made it something that it should not be. It was an event choked out by obstacles, a thing that could be obscured and forgotten, a moment that needed some other spark to expose it.

This will not do, I thought.

My first attempt at a repair didn't go well. I had an old adapter in a drawer somewhere, the appliance for which had long since been discarded. The small plug end had already been cut off, so had only to strip the wires and solder them to the leads of a white Christmas light bulb. But the adapter ran at nine volts, and burned the brilliantly-shining bulb out in minutes. So I went instead to another adapter we had bought a few years ago for another purpose, one that had a switch on it to vary the voltage. I did the solder job, dialed the adapter down to three volts, and plugged it in.

And things were set right. The bulb glows a little more brightly than my dad's original, but that doesn't seem to be that important. There is light. The nativity is its own light.

And perhaps that is the element of the whole thing that really attracted me to that creche as I was growing up, though I would not have been able to identify it at that age. Every other light in the house could be out, and yet the Nativity would cut through the darkness. It was a quiet and soft light, but it was powerful; no amount of darkness could ever quench it. And that seems to me to be so in keeping with the character of God, in that he upsets and inverts the expectations of humanity. We have this stubborn insistence that real power make itself known with fanfare and pomp and circumstance, and that any power which does not do so can be easily dismissed or defeated. We expect that a real God would arrive before the nations with terrifying force and unquestionable might. Instead, He quietly arrived as a baby, the son of a simple carpenter as far as anyone was concerned, on an otherwise completely unremarkable night in an unremarkable town in what is now the West Bank.

And yet for all that, somehow, that unremarkable event still shines through all of the black of twenty centuries of history. Into a world of "an eye for an eye" came "love thy neighbour as thyself". Into a world that praises riches came "Blessed are the poor". Into the throng of vengeful humanity came "Father, forgive them, for they know not what they do." The source of all our hope and the answer to all of our fears entered history, and what was done could not be undone.

The Christmas tree in the corner of my living room is bright, and colorful, and exciting. It dominates the space, to be sure. And yet my eye is drawn to the creche, its manger as yet empty in liturgical tradition (the Child will be placed there Christmas Day), its single quiet and humble little light burning like the light of Grace itself. Being absolutely everything it should be.

But in thy dark streets shineth the everlasting light
The hopes and fears of all the years are met in Thee tonight.